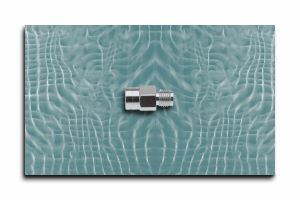 Additional information regarding the development of these adapters:

A longtime customer of ours was visiting one of their manufacturing facilities and discovered there was tremendous difficulty testing the finished product. The culprit was the mating and un-mating of FAKRA SMB connectors. Technicians were having an extremely tough time making the connection resulting in increased test time and poor tested product yield.

The plastic housings are available in multiple mechanical and color codes to easily identify mates. Designed for the automotive industry these connectors have penetrated off-road, construction, motorcycle, trucking, and watercraft markets. FAKRA SMB connectors were developed to operate to 3 GHz with a minimum of 100 mating cycles.

The design of these connectors makes them ideal for high vibration environments but less than ideal for high volume test applications. Having experienced BroadWave’s expertise of designing and manufacturing unique solutions for their test environments our customer suggested the test engineers at this facility consult with us for a solution. As it was explained to us the technicians were removing the plastic housing of the FAKRA SMB connectors on their test fixture altogether and sanding the outer diameter of the connector to make interconnect easier to achieve.

The engineers were concerned about the validity of the tests as well the life cycle of the test fixtures. They shipped us samples of the standard interconnect as well as the technicians ingenious albeit ill-advised solution. The result was the design and development of model 412-491-315. This 50-Ohm adapter has FAKRA SMB male to SMA female connectors and operates up to 4 GHz. The FAKRA SMB connectors of these adapters are designed to mate effortlessly with standard FAKRA SMB connectors for a minimum of 500 mating cycles.